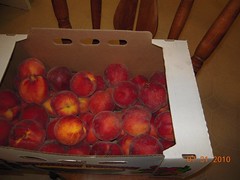 2013 Interviewed by Aimee Fahey on her blog, EcoGrrl. The EcoGrrl Interview: Michelle L. A great retrospective, for me, on why I focus on what I focus on.

2012 Testifying for the Portland City Council on the positive effects of home composting. My two-minute video clip begins around minute 27.

Note: I completely misunderstood my husband’s views on composting. I apparently told him to quit complaining about it, and he did. Peaches from a Washington farmer our club orders produce from during the summer/fall months. Image by alexis22578 via Flickr

2012 Testifying for the Portland City Council, urging them to pass the Urban Food Code Zoning. My 3-minute video clip begins around minute 54.

2011 Catholic Campaign marks 40 years of using justice to fight poverty – The Catholic Sentinel reports on the local efforts achieved by the Portland, Oregon campaign, I had the opportunity to receive the achievement for CAT Peaches, sliced, and diced and ready for canning! Image by alexis22578 via Flickr