I’m liberal, and I want my guns

Let’s start with this. Today, Obama said that, “Our first priority as a society is to keep our children safe.” This was said in conjunction with 23 Executive Actions designed to strengthen gun laws.

Let’s continue with this cartoon by “Tom Tomorrow” in This Modern World. 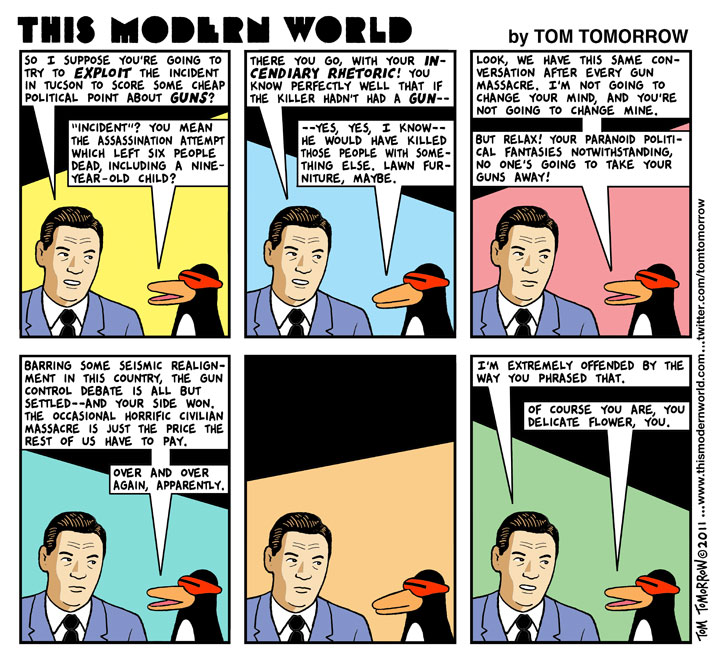 A well regulated Militia, being necessary to the security of a free State, and the right of the people to keep and bear Arms, shall not be infringed.

The questions usually begin with statements, “It means Militia.” “What is a militia?” But, it says, “AND, the right of the people.” “So, doesn’t that mean citizens of the States?”

So, let’s ponder this.

I don’t know if that’s why I’m saying. The logic is that we don’t need our guns to protect ourselves, right? The prevailing argument is that guns kill people and mass shoots are awful. But, I’m not buying into that.

My sister was killed by gun violence. Before the incident, he was just a collector. But, he was enraged or sad or disappointed. He didn’t control his emotions in a healthful way, and it meant that he killed my sister. And, then himself. Murder suicide. When it first happened, I blamed his parents. But, that wasn’t fair either. (Parenting is hard!) They were the first to send sympathy flowers, and now I feel confident that they raised their son the best they could. And, as an adult, their son made a bad choice.

I grew up around guns but never touched one until I was an adult. (The first gun I ever fired was just a few months ago, target practice with a .22 on an old beer can). The guns I grew up with were in a gun cabinet. My mother later told me it was never locked. But, we never dared touch that cabinet, let alone what was inside, without Grandpa’s expressed permission. The guns were used as tools to procure food. Sometimes it was a deer. Sometimes it was a cow.

So, maybe having our guns doesn’t protect us from home intruders or our government should it turn against us – but it is a right as outlined in our bill of rights. It’s a right that’s been argued about, discussed, and no conclusions are really made. There isn’t enough to outlaw it – it’s a right. So, we can’t agree to outlaw it, but we don’t like the horrors guns can inflict when people aren’t in their right minds. So, instead of creating a world where people can be in their right minds more times than not, we go after the guns, stripping away at the right that we can’t fully agree on.

What I’m saying is the argument is misplaced. Guns certainly do make it easier for people to kill people. But, if our focus is on lessening violence, there are other ways we need to do that. We need to reinforce connections with each other, collectively, as a society instead of cowing to knee-jerk reactions that limit our rights. That’s what we owe our children.

Safety is a ruse. Nothing is safe. Nothing is sacred. These are security blankets with which we comfort ourselves. There are no guarantees in life, and it’s a sad reality we face as we get older. Life is sadness. If we want a better guise of a “safe society” we’d do better to take care of physical and emotional needs, rather than outlawing guns. We’d do better making sure our grandparents have the care they need so they can age gracefully. If our grandparents have the care they need, then we would have less to worry about as they age. We could focus on our own families or own desires. If we could focus on our own families, and our own healthcare and non-contaminated food were taken care of and available, we’d have more time to devote to our families. We wouldn’t have to worry about budgeting in doctor visits to accommodate some arbitrary deductible. Maybe we would decide to make available paid sick days, so parents could stay home with their barfing children without guilt. Maybe we could stop punishing mothers for doing the noble thing and taking care of their families by lifting them up as they age and give all to society with “unpaid labor”.

If we really value children, and are putting our children at the pinnacle of this argument – then let’s truly take care of them by taking care of the people who matter most to our children: their mothers, their fathers, their caregivers, their aunts, uncles, grandparents, cousins, neighbors, friends. If we take care of our village, and are there when we need each other – perhaps we’d also be there to tell someone to put the gun down because that’s not how we solve our problems.