I read it shortly after it came out, on recommendation from my lifelong teacher friend. Personal experience confirmed and has confirmed Barbara Ehrenreich‘s reporting in Nickel and Dimed: On (Not) Getting By in America. When I participated in Project Closeup in 1995, our week long steward confirmed another bit I already knew to be true: most women get out of welfare by getting married. Although our prospects weren’t much better even after that event. If a strong middle class is part and parcel to what makes this country, this world, great – what sort of disservice to we provide when we strengthen the gap between those at the top and those at the bottom of the economic ladder?

I was born on a peninsula whose industry was dominated by mining and logging. Driving through, you see the contrast of depression and boom by the dilapidated farm houses and new McMansion log cabins. The shoreline resorts that are in disrepair now, decorate US2, whereas when I was young they always seemed to be a in state with a fresh coat of paint. Roads were worse off than I ever remember, with potholes and jagged pave jobs traveling with you as you drive. That’s Michigan now. A state dominated by industry, and when the resources are used up and the jobs go overseas — what’s left? 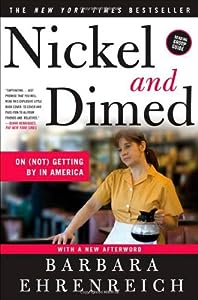 When my father left, my mother, a then stay at home mom, remained to support her three children. She got retail jobs where she could, but with a high school education and one who was never on a white collar career path, the only real support option we had was welfare. We were on foodstamps and public housing until my mother remarried. Even then, our prospects weren’t much better given the large family we had. Now we had free or reduced lunches to compliment our daily schooling. My own, more recent experience, also confirms the more humiliating aspect of asking for help.

Nationally, according to Kaaryn Gustafson of the University of Connecticut Law School, “applying for welfare is a lot like being booked by the police.” There may be a mug shot, fingerprinting, and lengthy interrogations as to one’s children’s true paternity. The ostensible goal is to prevent welfare fraud, but the psychological impact is to turn poverty itself into a kind of crime.

I’ve confessed to some people I work with that asking for help is one thing I have a hard time with. Is it any wonder, when thinking back to these other experiences — especially when one is at their most needy. When you’re a kid on food stamps or free/reduced lunch, you know the social stigma that goes with it. Other children talk, tease, about the lessor parents who basically can’t support their children and have to be on welfare. A term said with such derision that only the dullest person could miss it. Now, add the process onto it, and you have more humiliation than some people can handle.

We handled it because we had to. My mother had three children, then 4/5 to support after remarrying. We have our one son and ourselves, and with some chronic health problems to boot. Thankfully my husband was able to find a union job so we could get out of that economic depression. But, sometimes, I feel like we’re still on the brink, like when my husband back went out just three weeks ago. His job is manual labor. What happens should his body fail him, permanently?

Poverty shouldn’t be viewed as a crime. We all have a right to be here. And, we all have a responsibility to one another. These problems we face weren’t created in a day, and they won’t be solved in a day. But, we have to collectively take part in their change. We owe it to ourselves, our fellow neighbors, and our children.

How America turned poverty into a crime Barbara Ehrenreich on Salon